A property developer has been sentenced after the roof and part of the rear wall collapsed at one of his properties during demolition works in August 2017.

Manchester Crown Court heard how a group of workers, with no experience in construction, were engaged to demolish the property in Oldham.

HSE inspectors, alerted by the local authority building control department, found internal walls and supports for the roof had been removed. Further work was stopped and a nearby major was closed because of the danger of collapse.

The building collapsed suddenly on 12th August triggering an emergency response involving Greater Manchester Police and the Fire Service causing significant disruption as the site was made safe.

Miracle only one person injured

The collapse could have been prevented if a Principal Contractor been appointed and a suitable risk assessment carried out. These steps could have ensured the stability of the building during the demolition with regards to temporary works and control measures such as scaffolding.

The sole trader from Manchester was found guilty of breaching HSE Act Section 2 (1) and Section 3 (1) the CDM 2015 Regulation 19 (1). He was sentenced to eight months imprisonment for each offence (concurrent) and was order to pay prosecution costs of £65,000.

In his sentencing of Mr Ahmad, the Judge remarked that:

‘This was a very serious case indeed. It was nothing short of a miracle that only one person was injured. A clear statement has to be made to those who undertake significant projects such as this, namely that health and safety legislation has to be adhered to for good reason, and those who ignore its basic tenets will receive punishment. 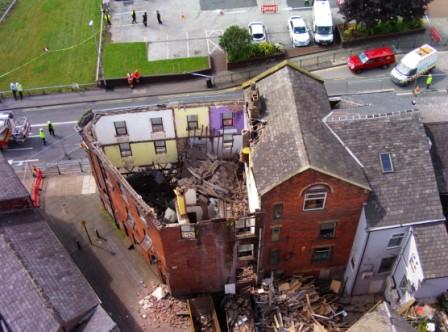