A District Council has been fined £250,000 after a worker was diagnosed to be suffering from hard arm vibration syndrome (HAVS).

Canterbury Crown Court heard how a workman employed by the Council visited his GP and was diagnosed as suffering from HAVS. HSE investigated the matter and found that the worker would typically spend up to 6 hours a day using a range of powered equipment including mowers and hedge cutters, depending upon the season.

The workman was not part of a health surveillance programme nor was he told how he should report his symptoms. Investigators revealed that the council failed in respect of:

“Hand Arm Vibration is a serious disease that impacts on people’s lives and impairs their ability to work. It is entirely preventable but once the damage is done it is permanent.

Any business, council or employers can learn from this case. If you have workers who use heavy machinery you need to ensure you properly manage the risks from HAVs, control or eliminate the exposure and train them so they can identify the symptoms.” 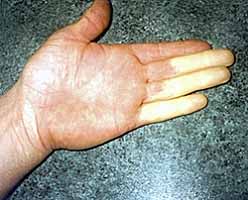