An international engineering company has been sentenced following the death of a worker who fell some 10m from an electricity pylon. The rigger was installing fall arrest lines for painters to use on a pylon near Carlisle in July 2014 when the incident happened.

When he arrived at the pylon the painters had already commenced painting even though the pylon had not been rigged. Whilst climbing the pylon he fell backwards, narrowly missing one of the painters working directly below him. He sustained serious multiple injuries and died at the scene.

Failure to implement, monitor and enforce system of work

The company had established a system of work but failed to implement, monitor and enforce the system. This failing exposed their employees to the risk of death. A fine £200.000 was imposed and the company ordered to pay costs of over £59,000.

“The company were clearly aware of the hazards involved with pylon work and had a system in place to manage the risks. Unfortunately, they failed to implement, monitor and enforce this system of work. In addition, the company failed to ensure the proper inspection and provision of safety critical personal protective equipment.” 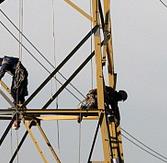